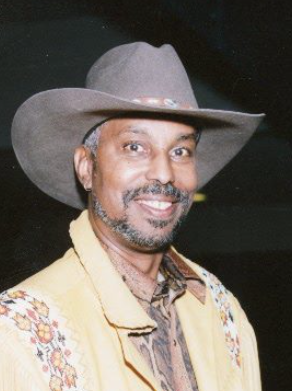 Living Presentations of The Buffalo Soldiers – By Chrystal Allen-O’Jon

As early as Charles Young could remember, he wanted to be a cowboy. It’s an interesting story of how he developed an interest and then deep respect for cowboys and very specifically, the Buffalo Soldiers.

Let’s back up to when Charles was a very young tike in Pittsburg, PA, where he was born. Playing pretend cowboys at a young age stirred an intertest that would become a lifelong passion. Charles and his mother followed his Military stepfather to Japan and then to Sacramento California, where he stayed and worked 30 years for the Department of Corrections until retirement. After retirement, Mr. Young purchased a mini ranch where he still resides with his favorite two horses and his dog. Mr. Young met Madison Walker (News Releases Details – EAC presents Madison Walker’s “True Tales of the Ole West” on March 27) and was invited to and began attending some cowboy re-enactments. It was at these re-enactments that he began to learn about the Buffalo Soldiers. It was such fascinating information, that it inspired him to do serious research. Madison Walker’s brother was in the movie “Buffalo Soldiers” starring actor Danny Glover.

Short History of the Buffalo Soldiers

Says Mr. Young, “It’s concerning that many of our young people and even some older, know nothing of this history”. To inspire our community, he hopes to see folks come to two upcoming events: There will be a living presentation at Tuscon Rodeo of Black Cowboys, Feb 5th at the Rodeo Museum and then on March 26th at McFarland State Historic Park – McFarland State Historic Park | Arizona (azstateparks.com), check the site for future events.