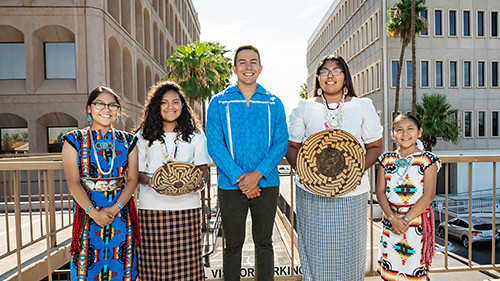 When asked about her future hopes for the center, Ms. Kroupa is passionate in her response about her love of the Urban Native American Community and issues she wants to continue to address. Says Ms. Kroupa, “understanding what it means to be an Urban Native American is what I hope to bring as leader”. She explains, ” if people understand more, they become vested in what it takes to create improvement and change”.

Some of the concerns Jolyana has for her community include issues like: The 60% that live off the reservation, high levels of alcohol abuse and education dropout rates. She sees these areas as important and will strive to make improvements by inviting community engagement.

Another concern Ms. Kroupa has is confronting the missing and murdered indigenous people issue. In dealing with this problem, “transient issues, having leaders more involved in politics and addressing voter registration opportunities is important for positive change”. President Biden has designated May 5 as Missing and Murdered Indigenous Persons Awareness Day. She plans to actively participate in this new annual May 5th is a date to celebrate that issue, https://www.knau.org/knau-and-arizona-news/2021-05-05/president-biden-designates-may-5-missing-and-murdered-indigenous-persons-awareness-day.

In 2017, the U.S. Senate passed a resolution designating May 5 a National Day of Awareness for missing and murdered Native women and girls. Tribes including the Navajo Nation also recognize the date as a day of remembrance and action. https://www.congress.gov/bill/115th-congress/senate-resolution/60/text.

May 5 was the birthday of Hanna Harris, a 21-year-old member of the Northern Cheyenne tribe of Montana, who went missing in 2013 and was later found sexually assaulted and murdered.

According to the U.S. Justice Department, Native American women face murder rates more than 10 times the national average. The Coalition to Stop Violence Against Native Women says four out of five Indigenous females are affected by violence.

Jolyana, says with regard to the missing women and the community needs in general, there are ways concerned citizens can lend support. “Start by taking the time out to understand our community’s needs, get involved, get to know the needs and barriers. Cultural awareness of indigenous people, hearing their cultural stories and teaching provides that awareness needed for empathy.”